A Life Member of the International Tuba and Euphonium Association, Dr. Thomas J. Ricer currently teaches Tuba, Euphonium, and Music Education at the University of Hawaii at Manoa and Punahou School and performs as a full-time tubist with the Royal Hawaiian Band, the Acting Principal Tubist of the Hawaii Symphony Orchestra, and the tubist in the Emerald Brass and Honolulu Brass. Ricer has performed with the Cincinnati, Honolulu, Syracuse, Knoxville, Lima, and Middletown Symphony Orchestras and the orchestras of the Appalachian Ballet Company, Ballet Hawaii, the Hawaii Opera Theatre, and Diamond Head Theatre, as well as Keith Brion’s New Sousa Band and the Knoxville Wind Symphony. He is a former principal tubist of the Springfield and Lebanon Symphony Orchestras. Ricer has played modern jazz as the tubist for the Dave Rivello Ensemble and funk as a founding member of the Po’ Boys Brass Band. In addition to his work as a tubist, Ricer has played bass trombone in the Blue Wisp, Streamliners, Mike Lewis, and Jack Carr Big Bands, with the Hawaii Pops, and as a soloist with the Eastman Wind Ensemble. He is a regularly contributing writer for the International Tuba and Euphonium Association‘s Journal. Dr. Ricer has been on faculty at Nazareth College, the Eastman Community Music School, and the Hochstein School of Music and Dance. When not playing low brass, Ricer is the lead singer and bass player for “CASH Back,” a tribute to the Man in Black, has completed multiple marathons, and has worked as a certified group aerobics instructor. He holds a Bachelor of Music from Miami University in Oxford, Ohio, a Master of Music from the University of Tennessee in Knoxville, Tennessee and a Doctor of Musical Arts degree from the Eastman School of Music in Rochester, NY. 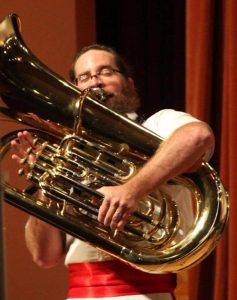 For more information or to book T. J. Ricer or CASH Back,